Shake the Hand that Shook the World (sculpture/installation), 2010 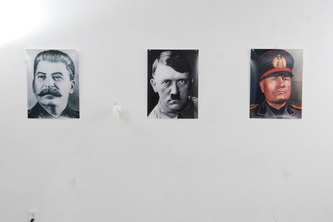 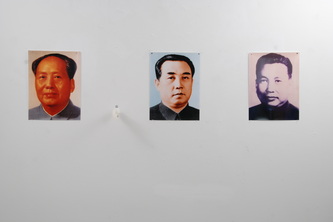 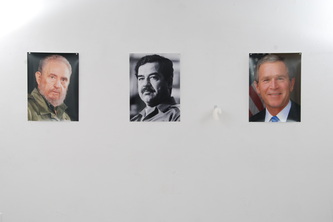 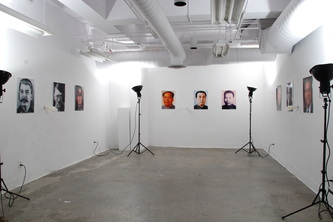 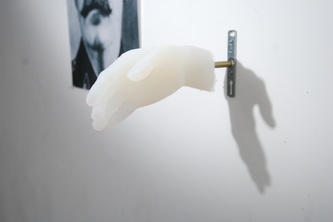 Throughout history man has wronged his fellow man for the sake of political recognition. Some of these people have left a destructive mark in time that will not soon be forgotten and so, they “shook the world.” The act of “shaking one’s hand” is a gesture of greeting but also one of congratulations, and a symbol of agreement or gratitude. Most who learn of the terrible things done by these people would not congratulate them; therefore the act of shaking the hand of any of them would be utterly appalling.

My process of choosing the featured men was dependent on world recognition and the amount of harm done to humanity. In chronological order they are:
Joseph Stalin was the General Secretary of the Communist Party in the Soviet Union from 1922 until his death in 1953. During his reign, between 3 and 60 million people died from multiple famines, and executions during an occurrence dubbed the Great Purge.

Adolf Hitler was the Austrian-born German dictator and the leader of the Nazi Party from 1933-1945. In an attempt to build a “perfect” German population, he ordered for the execution of 11 to 14 million people, among them Jews, political opponents, mentally handicapped, homosexuals and others.

Benito Mussolini was one of the founders of Italian Fascism and was the Prime Minister of Italy in 1922. His dream of creating an empire led to the invasion and gas bombing of Ethiopia, and also the invasion of Greece. Mussolini united with Hitler and condemned Italian Jews to German death camps. Under his command over 200 000 people were killed.

Mao Zedong (Tse-tung) was the leader of the People’s Republic of China from 1949 until his death in 1976. His social programs were blamed for causing famine and damage to culture and economy. His purges are believed to have caused 50 to 70 million deaths.

Kim Il-Sung was the leader of the Worker’s Party of Korea from 1948 until his death in 1994, at which point, his son Kim Jong-Il took over. In 1950 he ordered the invasion of South Korea, resulting in the deaths of about 3.5 million people. He also conducted North Korea’s first large-scale purges.

Saloth Sar (commonly referred to as Pol Pot) was the leader of the Cambodian Communist movement known as Khmer Rouge beginning in the mid-1970’s. A combination of slave labor, malnutrition, poor medical treatment and executions resulted in the deaths of about 21% of the population.

Saddam Hussein was the President of Iraq from 1979 to 2003. Two years after a truce between Iraq and Iran in 1988 he ordered the invasion of Kuwait where it is said that soldiers tortured and executed prisoners. He caused Western-supported Arab states to turn against the Palestinians, all of which resulted in an international crisis. Hussein faced many charges, some of which include ethnic cleansing against the Kurds, the invasion of Kuwait and killing political activists.

George W. Bush was the President of the United States from 2001-2009. During his period in office, he announced a War on Terrorism in response to the terrorist attack in New York and ordered the invasion Afghanistan and Iraq. He accused North Korea, Iran and Iraq of threatening world peace and called them the “axis of evil.” War and security became his main priority, leaving other issues behind. There were also issues surrounding mistreatment of suspected terrorists. These issues caused public support to drop substantially throughout the USA and the world.

Although these men generally would not receive a positive reception, there are still many people who believe in their causes and ideologies. The purpose of this piece is to allow for the option of physical interaction with them. Viewers are encouraged to examine each individual and, since most of their faces are so iconic, reflect on how each caused global change. Being confronted with a representation of the person allows viewers to think critically about whether or not they agree with any of the actions taken by the political figures.