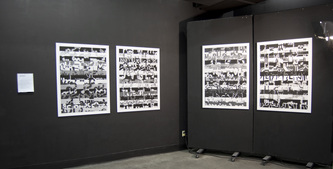 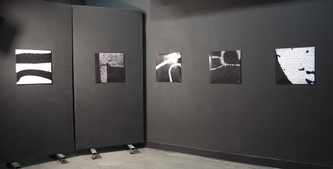 Limitation explores the inherent characteristics of human language through the use of macro photography to distort the text from my collection of graphic t-shirts. While studying language theory I became inspired by the peculiar fact that language, often considered our primary tool of communication, is quite ambiguous in its nature.

Language in itself is a human construct, and as such, relies heavily on interpretation. Its context is essential to comprehension. I question what happens to the meaning when a word is removed from the structure of a sentence. The meaning itself becomes distorted, just as photographing a small portion of an object can obscure that object’s original essence. Through this concentration, I reduced the text to form, texture and colour, causing the words to become illegible.

“Leafs” combines the photographed pieces of text in rows, which builds a new context that alludes to four pages of a book. In “Fragments”, the deterioration of the material used to create the text is more evident, conveying the inevitable misinterpretation of language. Through exploring the minds way of processing language, Limitation reveals its ambiguous nature and its reliance on subjective interpretation.